Actions not always marked as failed in case of exceptions (#3286)

Test cases may use “inline actions”, i.e. the action boundaries are created by calling the startAction()/stopAction() methods. If such an action failed with an exception, this action was not always marked as failed in the test results. As a consequence, when creating the load test report later on, this action was not counted as failed and the corresponding transaction did also not provide the name of the failing action. Fixed now.

In order to improve this situation, the result browser info is no longer attached to the exception stack trace, but stored separately to the timers.csv files as new fields of the transaction data record.

Note that choosing VPC and subnet is currently supported in interactive mode only. There is no command line option for this purpose yet.

URI path segments may contain characters which are reserved according to RFC3986 in percent-encoded form. However, since Apache HttpClient 4.5.8 (used by HtmlUnit 2.35) percent-encoded ampersand characters in URI path segments are not preserved any longer but written in decoded form to the wire. So http://localhost/wild%26free/index.html is automatically converted to http://localhost/wild&free/index.html.

It is not clear yet, whether this behavior is a bug or a feature of HttpClient. Anyway, many servers are not prepared for clients performing this conversion and would return redirects or error pages in this case. Since this functionality cannot be turned off in HttpClient, we have decided to ship XLT with the older HttpClient 4.5.6 instead.

bq(note). XLT now ships with the XLT Jenkins Plugin 1.3.3, which fixes some issues. See below for more information. We recommend to update your Jenkins installation accordingly. The plugin can be found in directory <xlt>/tools/xlt-jenkins-plugin-1.3.3.

If the plugin is configured to use AWS EC2 instances for the load test, the instances are started prior to the load test and terminated after it, but XLT was not configured correctly to actually use them. Fixed.

Request timeline - In order to let you inspect the temporal sequence and duration of requests in a graphical timeline view, XLT may now generate an HTTP Archive (HAR) file along with an appropriate viewer as part of the result browser. The HAR file contains information about all requests/responses grouped by their corresponding action, including headers, sizes, and network timings. For client-performance tests, page load event timings are included as well. In order to save valuable disk space, the response content is NOT included in the generated HAR files.

To enable this feature, add the following line to your test configuration: 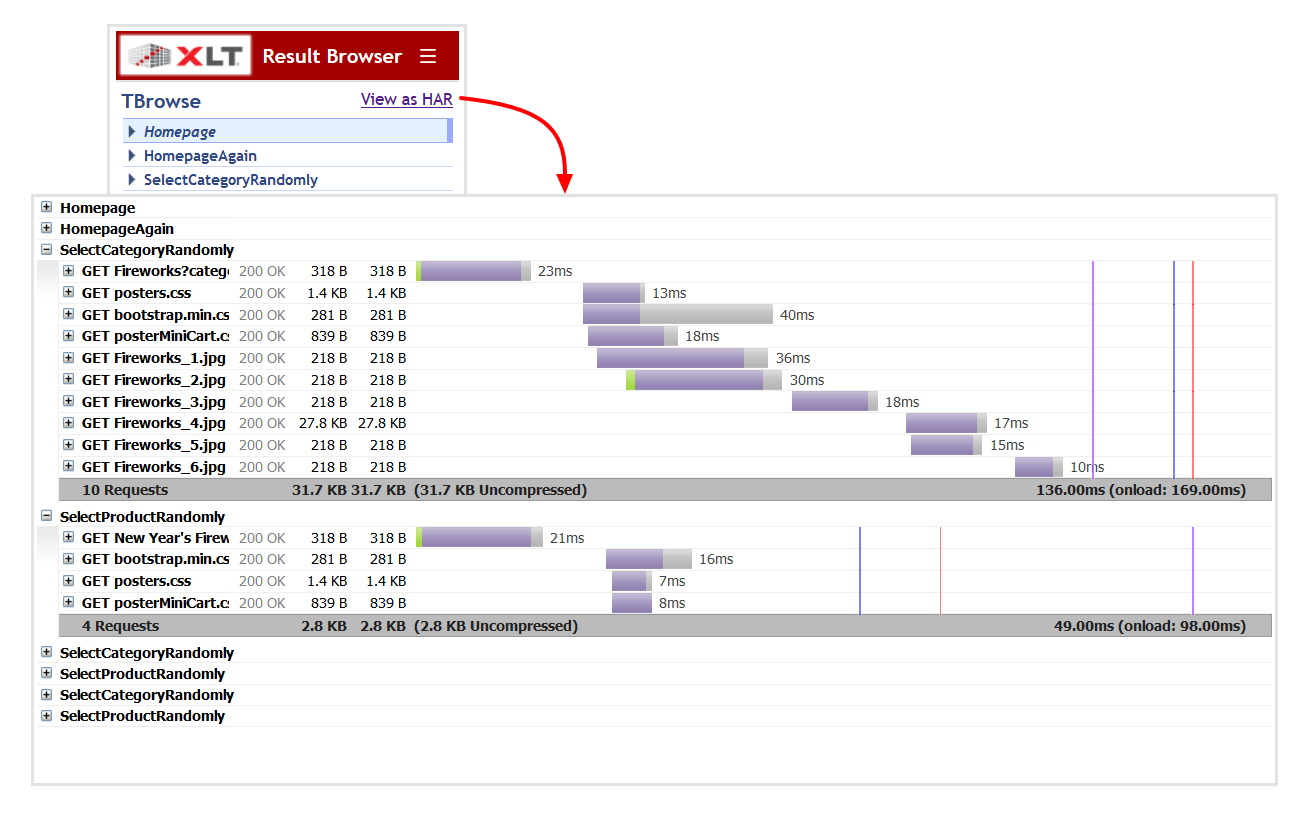 If you want the ExclusiveDataProvider to filter out comment lines, create it as follows:

Please note that this setting overrides any window size settings if present as well.

HtmlUnit updated - HtmlUnit and its accompanying HtmlUnitDriver have been updated to version 2.35.

This search is using Algolia Search Services. Please confirm that you understand and accept their privacy policy before searching. If you don't wish to interact with this third party, simply click Cancel.